Home • Business • What Material Is Synthetic Ice Made Of?

What Material Is Synthetic Ice Made Of? 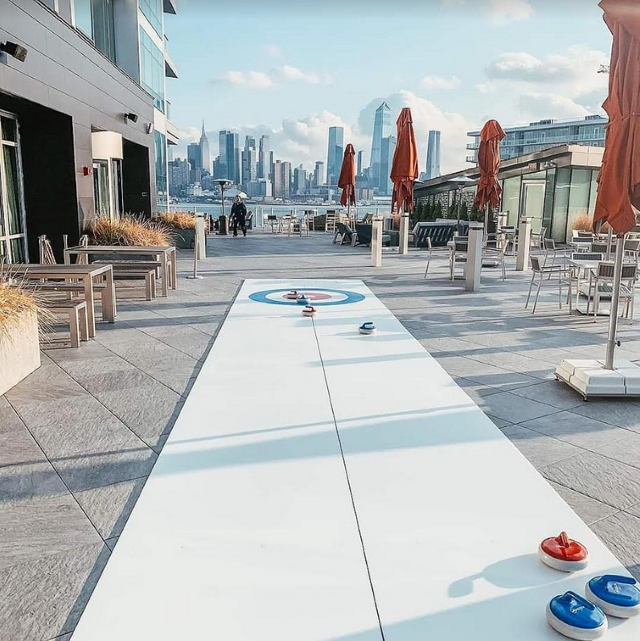 Hockey players and ice skating professionals around the nation are starting to respect the concept of synthetic ice. It is long-lasting, durable, easy to install, and has its own lubricating system. More importantly, it allows people to build ice skating rinks and ice skate in the comfort of their own homes. As interesting as it is, there are a lot of questions about its origins and what it is made out of. So what exactly is synthetic ice made out of? Keep reading and we will tell you.

In the early 1960s, a group of developers created the first batch of artificial ice. Although it was a partial success, it still had a long way to go before it could be useful to anybody other than the ones that had the time and the money to maintain it. The early synthetic ice had to be constantly lubricsated by a silicone solution that caused problems if it was allowed to build up on the flooring. Without the lubricant, ice skaters could not skate on the surface without a challenge.

As developers learned more about plastics and the way to create them out of synthetic polymers the way that the artificial ice was formed began to change. A polymer is a naturally occurring substance that is made out of large molecules that form a chain as a bond and connect together in a tight-knit fashion. Developers learned that they could combine lubricants and other agents inside of the polymers in order to create a type of flooring that mimicked ice with self-lubricating technology.

When skaters skate across the ice with steel ice skate blades they create friction. The friction that the blades create causes the ice flooring to melt just enough to create a tiny layer of water that the ice skates can glide across. The constant motion of the skates generating heat is how there is a neverending supply of lubricant on the rink.

The problem that developers had when they created artificial ice is that they did not know how to re-create the self-lubricating effect of melting ice – until they discovered they could do it with synthetic polymers.

Everything that we can see is made up of tiny atoms and molecules. When scientists use this knowledge to create products from a microscopic level they have the ability to manufacture items with superior quality and durability. In the case of self-lubricating synthetic ice, the developers were able to mimic ice by using science to cause the molecules of the plastic to bond together and attach with tiny molecules of lubricant infused into the structure. Because of this, when ice skaters glide across the surface of synthetic ice that has lubricants in it, the motion from the skates releases the lubricant onto the surface and creates an environment that is similar to real ice.

The Quality of Synthetic Ice

Since the material that synthetic ice is made from in the modern day has been created scientifically, it is hard to beat the quality it has to offer. Now, not all brands have the same quality of hockey flooring. Sniper’s Edge hockey offers the best quality synthetic ice that is available on the market. From hockey balance boards to slick tiles, everything that you could ever want to become a champion hockey player is available to you. When it comes to your game, make sure you deal with professionals.

***Sniper’s Edge Hockey loves Canada! We proudly ship all of our products to Canada and offer the same return policies as we do for everybody else. We realize the exchange rates for the Canadian dollar are not the best right now, so we’re trying to help by giving you free shipping and no customs/duty.***