The Scout is Indian’s take on the midsize cruiser. It’s the cheapest and most approachable bike in the Indian lineup. And for me — my petite frame puts a hard limit on the weight and proportions to which I have access — it was an answer to my prayers.

When Indian introduced the Scout, its antiquated rivals were rolling relics carbureted and cooled by air. And many had been derided with labels like beginner and girlfriend (as if that’s a bad thing!). But the Scout is different.

Powered by a liquid-cooled, 69 cubic inch V-twin pumping out 100 horsepower and 72 lb-ft of torque, the Scout offers looks, power, grace and technology that go toe-to-toe with the great road-going machines the industry had to offer at the time – many of which even dwelled in the bagger category. And it’s made for the fun stuff — maneuvering twisty canyons, mobbing around town, leaving a mark on the dragstrip, or just showing off its sexy physique.

The brand-new Rogue version sports an even badder look. It’s the best mix of clever, pretty and mean with a bigger 19-inch wheel, blacked-out bits, mini apes, a new fairing and sport-style seating. It won’t just turn down your drink, it might punch you in the teeth for asking. 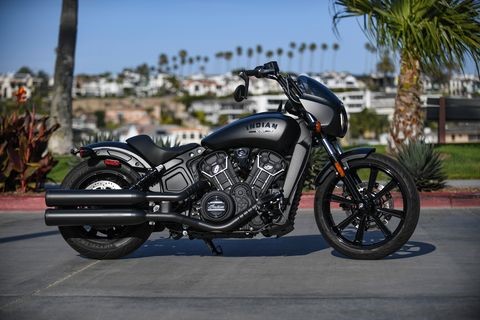 Indian resolved its main issue with the Scout for this model: a factory glitch with the kickstand meant the bike would blow over in a soft breeze if you didn’t pivot the handlebars to the left. After rectifying that, the metamorphosis of the Scout model has been subtle. We’ve seen new colorways and accessories. Indian debuted the Bobber, an iteration of Scout with a beefed-up body and redirected power delivery aimed at the cool kids. But beyond that, Indian has stuck with the “if it ain’t broke, don’t fix it” mentality, which I generally supported. — until now.

Riding The New Scout Rogue Feels The Same — But Different 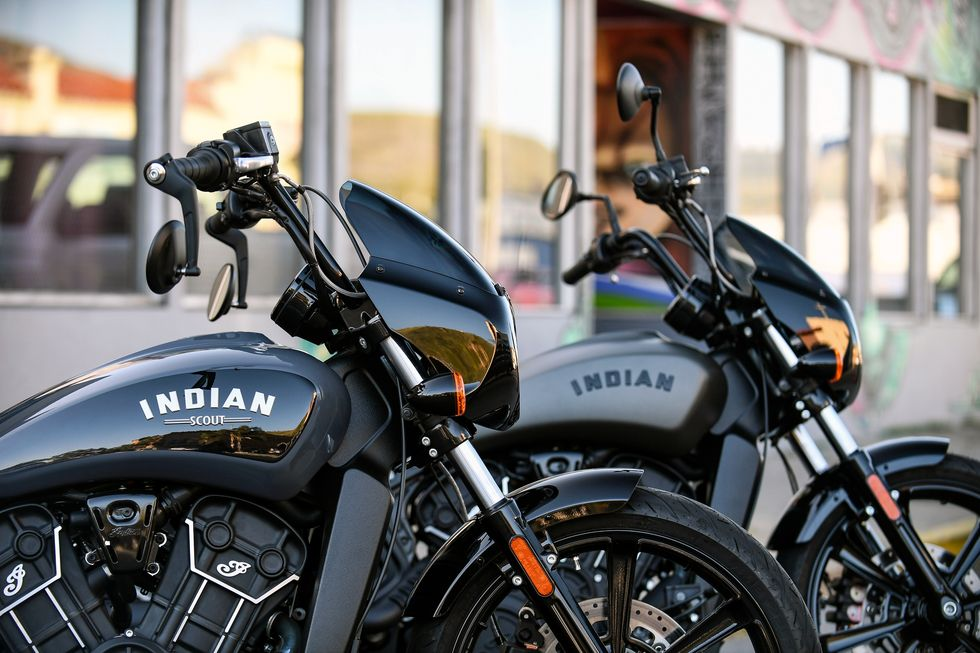 Riding the smooth, flowing contours of the highway felt liberating. I pushed the limits of this newer model in a way I hadn’t with any other Scout. So, it seemed, did my colleagues. Possibly, it’s due to several years’ worth of miles trailing behind me. Or the enthusiastic cadre of journalists giving chase through the canyon. Or, quite conceivably, it was the larger forward wheel, slimmer rubber, comfy ergonomics and an ample 100 horsepower that brewed the perfect pleasure potion. Ultimately, my experience that day owed gratitude to a pinch of every ingredient.

Even sans the optional bells and whistles – with basic ergos and standard dual shocks – the Scout Rogue was comfortable and confidence-inspiring. Handling it through chicanes, s-curves and hairpins seemed almost effortless. Many riders in our group threw sparks and wore down rubber on the pegs, if not as a badge of honor than an indication of thrill. A hundred horses can do a lot for performance if you know how to wrangle them. And even if you don’t, the smooth delivery at the throttle, firm and responsive clutch and 72 lb-ft of torque make the effortless command of this cruiser feel intuitive. 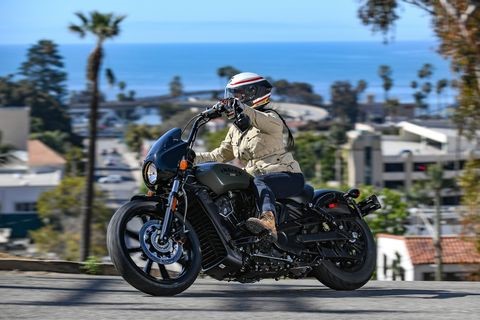