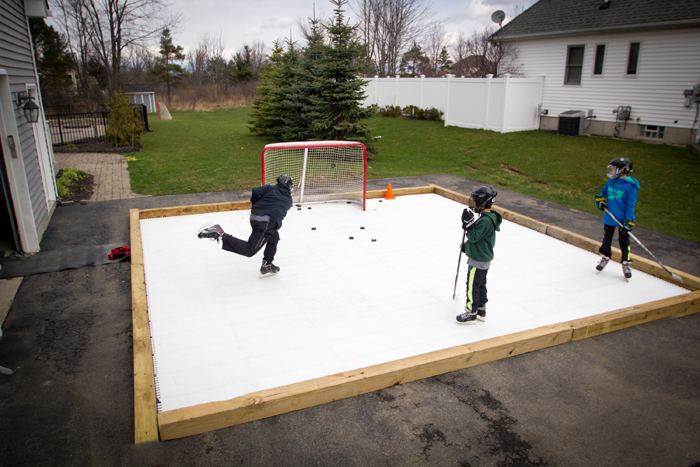 Most players identify a hockey passer as a training aid that is used to practice passing and receiving the puck. For the most part, this still stands true, but there are a lot of other training advantages that one can receive from using a hockey passer to practice shots with. If you want to practice in a way that will strengthen and sharpen your one-timer skills and deke moves, you might be surprised to learn that a passer/rebounder can help quite a bit.

One of the greatest training aids available on the market today is the hockey shooting tarp. The reason for this is because if you have one you can repeatedly practice your shooting skills over and over again until you get them perfect. The holes on the shooting tarp that allow your puck to pass through are perfect targets for players to focus on, and master. Although shooting at a goalie in real life, is not even close to shooting at a fake goalie on a tarp, you can practice pinpointed shots that will greatly benefit you in a real game. The skills that you learn from shooting at a tarp are strong enough to take to a real game and dominate.

Assuming that you have a hockey flooring in place, such as synthetic ice, or dryland tiles, put your hockey passer on the ground about two feet in front of you, but 5 or 6 feet to your right or left. For the first 5 passes simply hit the puck to the rebounder and let it come back to so that you can get a feel of the tension that you will need in order to accurately receive a puck.

Make sure that your hockey shooting tarp is directly in front of you so that your body is facing it. After the first 5 warm-up passes, pass with a forehand shot to the passer, then allow the puck to come back to your backhand.

Simply repeat this three of four times until you get the hang of it. After the second warm-up, get ready to shoot. Pass the puck to the passer with a forehand shot, but allow the puck to come back to your backhand. In a nice even move shot a backhand shot to the goalie on the shooting tarp. Aim for the lower target between the goalie’s legs. Repeat.

This next drill will require you to have a bunch of pucks ready to pull from because it will be a continual shooting drill until all of your pucks are gone.

Place your hockey passer at the 10:00 area in front of your body. Out in front of you, about 5 feet and a little towards the left so that it is at the position of 10 on a clock.

Take a couple of warm-up shots at the passer and allow the puck to come back to you gently until you get a feel of where you should be in order to accurately get the puck to come right back at you.

Look at the upper left target above the shoulder of the goaltender on the shooting tarp. Make that your first target.

After you warm up with passes, hit the puck with some heat behind it and allow it to come back to you. Once it gets in reach of a good shot, take aim and shoot for the target. You may or may not make the shot, but keep going and sooting the same shot over and over again until your pucks are depleted.

Stying in shape and strong are very important in the game of hockey. As long as you keep practicing and staying sharp in your game, you will continue to keep your skills in check until you need them in a real game. The more you practice, the better you become. Keep it up and be faithful to your training and yourself.